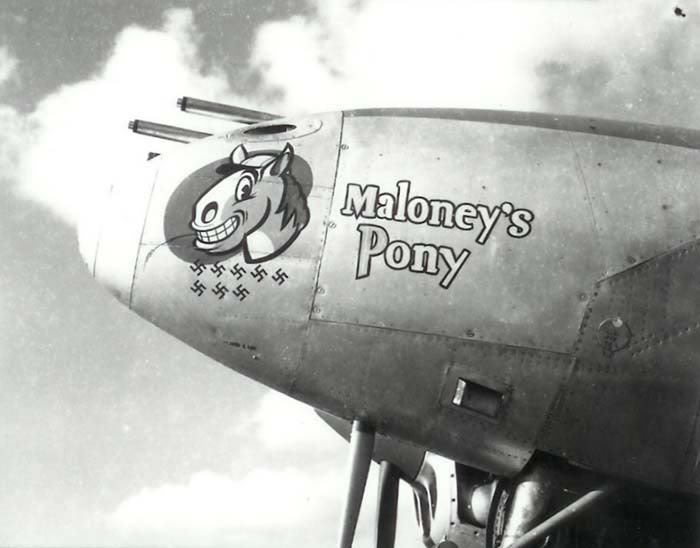 The untold story of “Maloney’s Pony”

On August 19th, 1944, the 27th’s highest scoring ace of World War II, Lieutenant Thomas E. Maloney lost both engines of his P-38 during a beachhead cover mission, thereby setting the stage for one of the grittiest personal episodes of the war.

While strafing, Maloney's right engine began knocking.  A check of the oil pressure and temp showed that he had lost the engine.  He feathered the prop and called his flight lead, Major Pope to inform him. He climbed to 1,500 feet and came off the coast and headed home to Aghione. Major Pope and two other members of the 27th flight broke off their strafing passes to escort him. They were about 60 miles from Corsica.

Barely five or six miles off the coast of France, Maloney’s other engine developed an oil leak and would soon fail. Though ditching the P-38 in the sea was not recommended and a very risky procedure, he had no choice in the matter. He lost most of his altitude trying to get the engine started and it was then too late to bail out.

He made it successfully, however, and when the spray settled Maloney was seen to climb out and get into his dinghy and wave to the flight overhead. Pope had been on the radio already and called the air-sea rescue station for help. For another few minutes, until darkness fell, they stayed over the hapless Petdog (Assigned call sign).

During the night Maloney drifted into shore. It was still dark and he was cold and wet. He was not sure whether this beach was enemy occupied or not, and for a while he stayed near the water's edge. But with the dawn he thought he might be seen and captured and that was the last thing Maloney wanted.

Knowing the dangers of mines he stepped carefully through the sand and brush looking about carefully for evidence that they had been planted, and for signs in German, French, or English.

Despite his care the inevitable happened. The beach was mined and had been for some time. The surface of the sand had reassumed its normal appearance. Maloney triggered one off. In the split second before it went off he sensed it and flung himself onto the ground. But not before both feet were shattered, both legs had compound fractures just above the ankles, his legs were torn open by scores of metal fragments, his left bicep was cut open and his face was powder-burned.

Maloney lay dazed and bleeding and he drifted off to sleep. The next morning he awoke and tried to drink from his canteen, but found it to be dry.  For the rest of the day he alternately passed out and woke up.  On the third and fourth day - Aug 21 and 22 - Maloney began to realize he was going to die of thirst before his wounds.  It took him a tremendous amount of time to drag himself the 50 feet it took to get to a row of bushes where he found water.   This entire time he would pass out and wake up.  At one point he felt movement in his wounds.  A check of his wounds revealed that his wounds were filled with maggots.  He killed as many of them as he could.

​On the fifth and sixth day he moved toward a wooden observation tower.  As he got closer he entered a swampy area with water that made moving a lot easier.  He finally made it to a small wooden foot bridge that he began to dismantle and build into a raft.  He did this on Aug 27th and 28th.  He used the small raft and some poles to propel him through the swamp.  He was hoping it would lead back to the ocean but it never did.  He stopped in an area known as the Camargue, one of the most mosquito infested areas in the world.  He simply covered his face with his hands and let them have at him

​The next morning, August 29th, he got back in his raft and went back to a cabin he saw earlier.  When he approached he saw six Frenchmen that were cleaning up the mess the Germans had made.  He called to them and they came to his rescue.

They placed him in the bed of their old truck and started to drive up a trail.  The pain was unbearable and Frenchman ended up hand carrying Maloney up the trail.  One of the men drove the truck ahead to arrange for an ambulance.  They finally made to a road where an ambulance was waiting.

On the way to the hospital, the ambulance stopped at a house where a French lady fed him some soup, his first meal in ten days.  He thought it was the best soup he had ever eaten.  Next, the ambulance took him to a French hospital in Marseille.

There was antiseptic but no anesthetics. The doctors began the painful task of extracting the fragments—fortunately they had some penicillin. They soon thought he would lose both legs. Marseille had mostly been bypassed by the army. But in a couple of days the medics came for Maloney, and he was flown to the 100th General Hospital in Naples. From here the word was flashed to Colonel Richard at Foggia that Maloney was back. In a day or two red tailed P-38s began to land at Capodichino and small groups of pilots commenced to find their way to Maloney’s ward. It now looked like he would keep one leg. Then it developed that he might lose only one foot.  In the end, he did not lose either.

Colonel Richard (1st FG/Commander) issued an order that every day that weather permitted, a 27th pilot would land at Capodichino and visit Lieutenant Maloney. He was the group’s highest scoring pilot in World War II so far, he had been immensely popular. He had 15 victories, air and ground, over the enemy. And then his promotion to Captain came in.

After a month more they flew him home to the states. The date was known at the 1st Fighter Group headquarters, and after the C-54 lifted away from Capodichino and leveled off at altitude, a dozen red-tails from the 27th Fighter Squadron settled down on both sides, silently from nowhere, like silver ghosts, and they escorted him for a hundred miles out over the blue Mediterranean. Then one by one they silently peeled off and went back to the war.

In a special order Colonel Richard ordered that in the 27th Fighter Squadron, airplane "number 23 should for evermore be named "Maloney’s Pony".

​The original nose art was conceived by Sergeant Richard Abbott, Tom's Crew Chief on aircraft number 23.
However, when the 27th transitioned from the P-38, this tradition was lost.  The 27th flew without a Maloney's Pony until they received F-15A's.  F-15 75-0023 (5023) nose was painted with the words "Maloney's Pony" and the tradition came back to life. 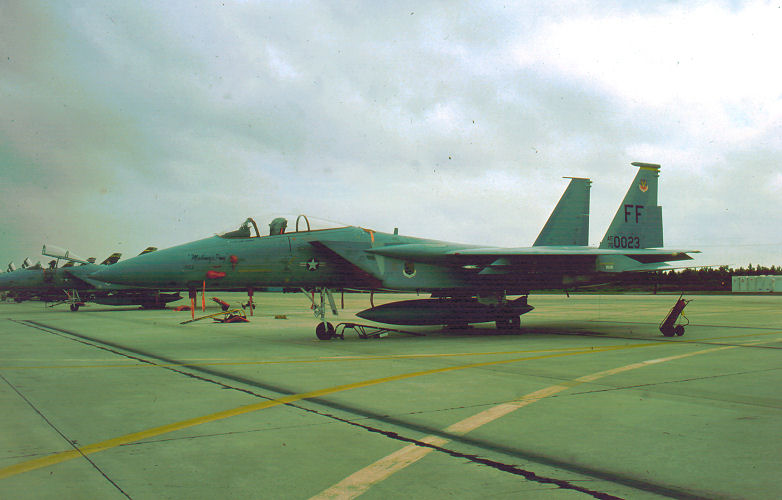 On 11 June 1977, 5023 was on display for Langley's Open House.  Maloney's son was a pilot at Oceana and was visiting when he saw Maloney's Pony.  He called his Dad, who called the 1st Tactical Fighter Wing Commander, Col Welch (12th CSAF) and told him, "I'm coming to see my plane".

On 10 March 1980, Maloney's Pony was being run after being the "Can jet" for several weeks.  The jet had a fuel leak behind the left anti-collision light that was out of limit.  There was lots of discussion on whether to run the aircraft or not, but at some point the pressure to make the jet ready for Monday's schedule took over.  When the maintainer started the #2 engine and energized the electrical system, a large explosion occurred on the left wing root, fire ensued and 5023 was destroyed by fire.
On 5 June 1981, F-15A tail 76-0023 (6023) was designated the next Maloney's Pony.  Lt Col Hardenbrook (27 TFS/CC on the right of the podium) and Lt Col Bill Goodrich (27 TFS/DO on the left) hosted Thomas Maloney (at the podium) for the dedication ceremony. 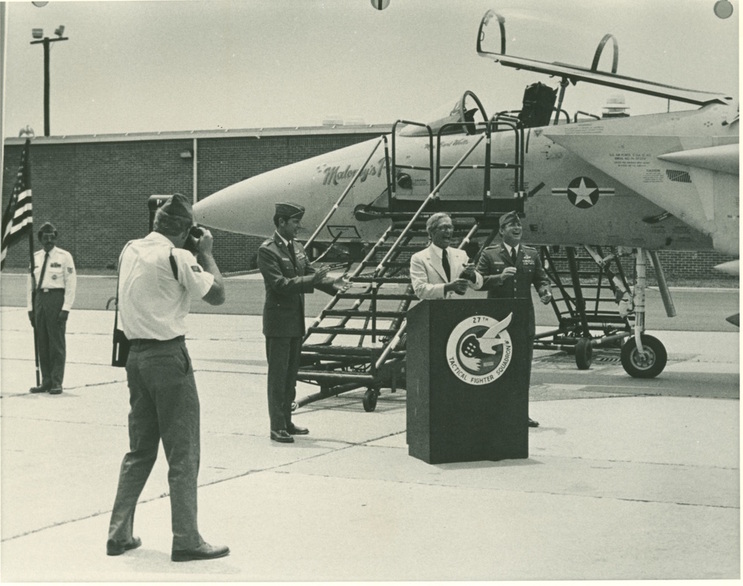 6023 was transferred to the 5th Fighter Interceptor Squadron when the 1st TFW upgraded to F-15C's.  On January 17th 1986, 6023 crashed into a peak in the Guadalupe Mountains near the White Sands Missile Range killing the pilot. 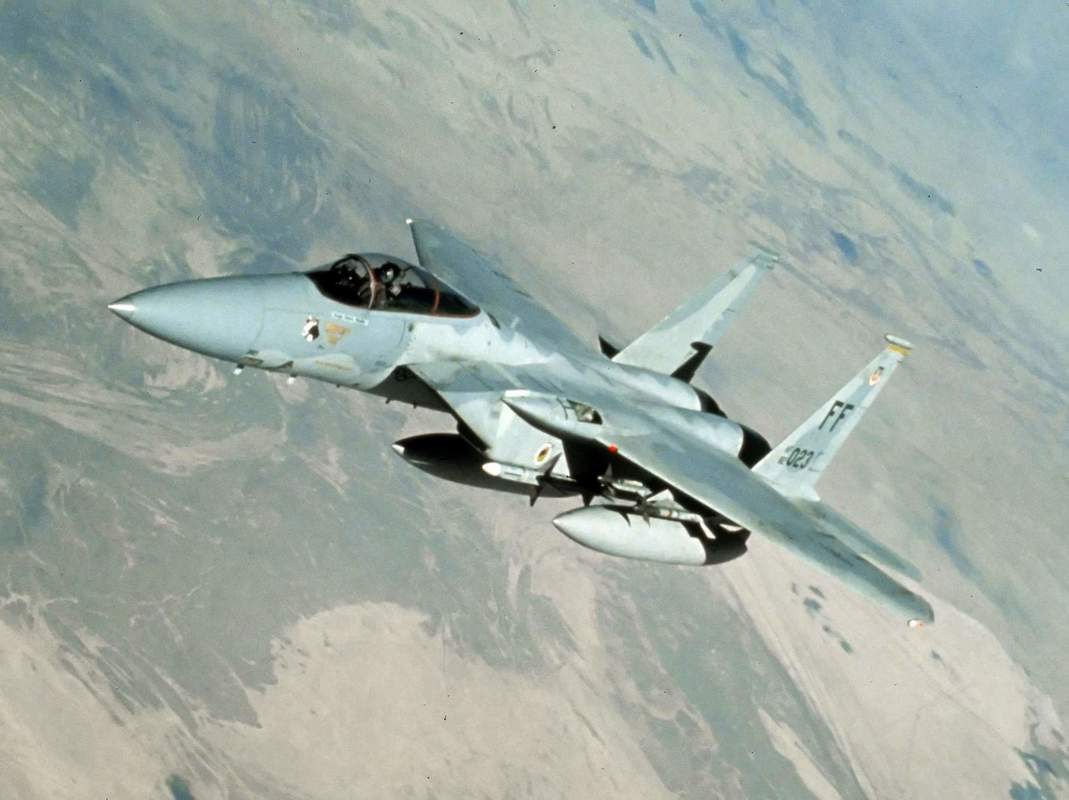 2023 Was destroyed on 21 March 1996 while it was taking off from Nellis during a GREEN FLAG mission.  The pilot, The pilot, Capt. Mike "Arson" Fontaine, ejected before the aircraft impacted the terrain and survived with significant injuries.
READ THE PILOTS STORY HERE
After the mishap, F-15C tail 81-0023 (1023) became Maloney's Pony.  1023 was transferred to the 125th Fighter Wing, Jacksonville, FL (ANG) when the 1st transitioned to the F-22, and is still flying as of today. 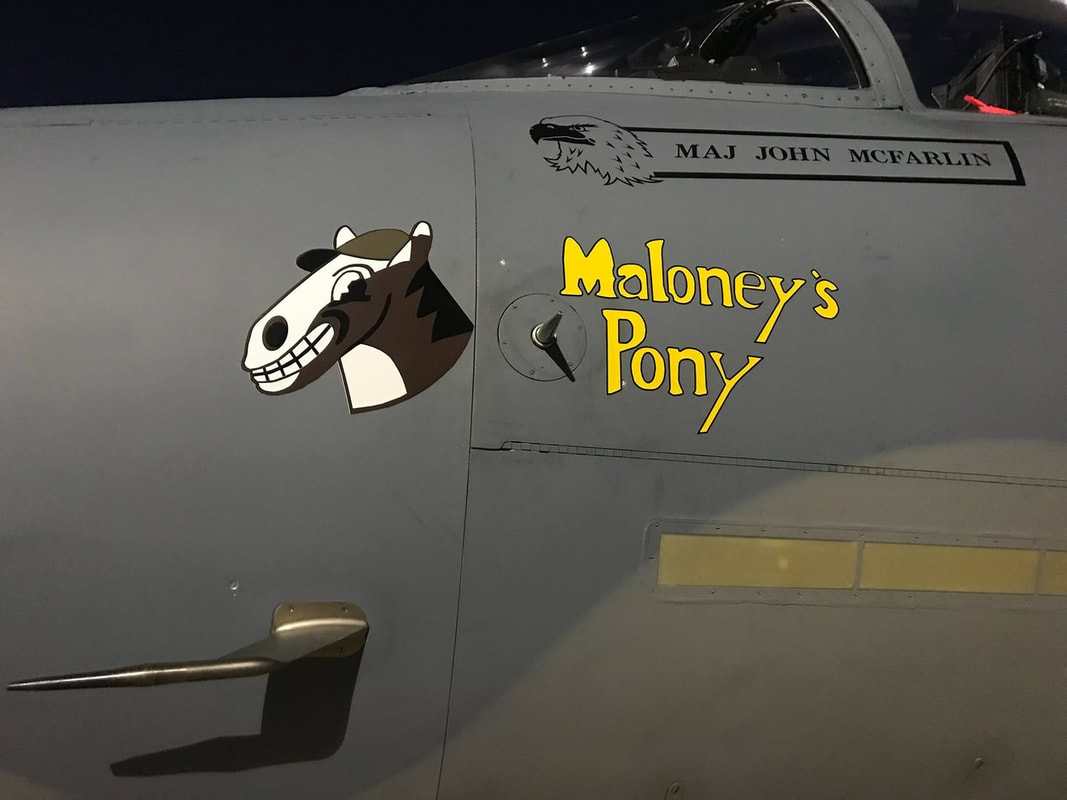 Once again, because of the 1st transitioning to a new aircraft, the position of Maloney's Pony was left vacant for a few years.  The low observable coatings on the F-22 make it impossible to paint anything on the aircraft.

The idea of resurrecting Maloney's Pony was born out of a discussion in the 27th Fighter Squadron vault about an F-15 door 3L panel that was in the main briefing room.  The panel had Maloney's Pony nose art painted on the exterior and was believed to be a panel off of 2023 that was destroyed at Nellis AFB.  After some research it was discovered that the panel did in fact survive the mishap, and this was it.

When the 27th started talking about bringing back Mahoney's Pony, they asked question about permanent markings on the exterior of the jet.  They were shot down.  This led to the idea having a cover for the HUD, seat and intakes made to distinguish Mahoney's Pony from the rest of the fleet.  The 1st Fighter Association ponied (get it) up the funds to make it happen and a talented AFE airman designed the covers.

​A ceremony was held on 24 June 2011 to dedicate F-22 tail 174 as Maloney's Pony.  The jet had temporary nose art placed on the left side of the fuselage for the ceremony.  Thomas Maloney's son, Rick Maloney and his grandson Patrick were present for the ceremony.
Rick Maloney, son of World War II ace Maj. Thomas E. Maloney, and Lt. Col. Jason Hinds, 27th Fighter Squadron director of operations, unveil the "Maloney's Pony" graphic displayed on the body of an F-22 Raptor
The photos of the ceremony got significant attention, and some media play. CSAF (Gen Schwartz) was less than pleased with the nose art on an F-22 and called 1 FW/CC the next day.  So much for tradition.

In late 2015, articles entitled "Maloney's Pony Rides Again" began to circulate.  The articles discussed the fact that tail 174 had just come out of LO restoration and now had Maloney's Pony imbedded in the coatings.  They also went on to say that Maloney's Pony was the first jet into Syria when the US started attacks against ISIS.  Both of these stories are incorrect. 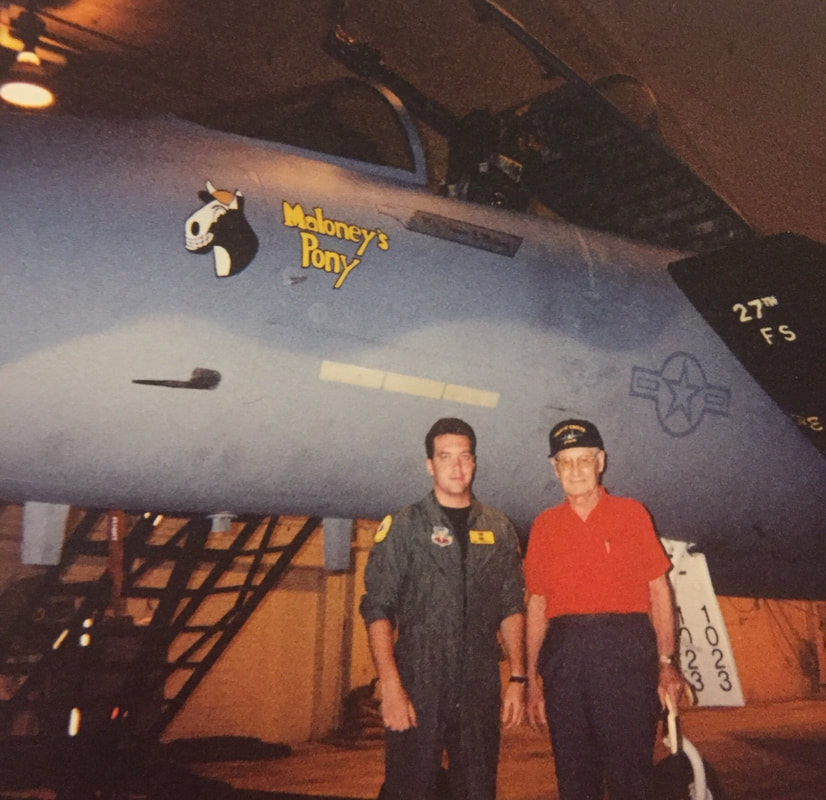 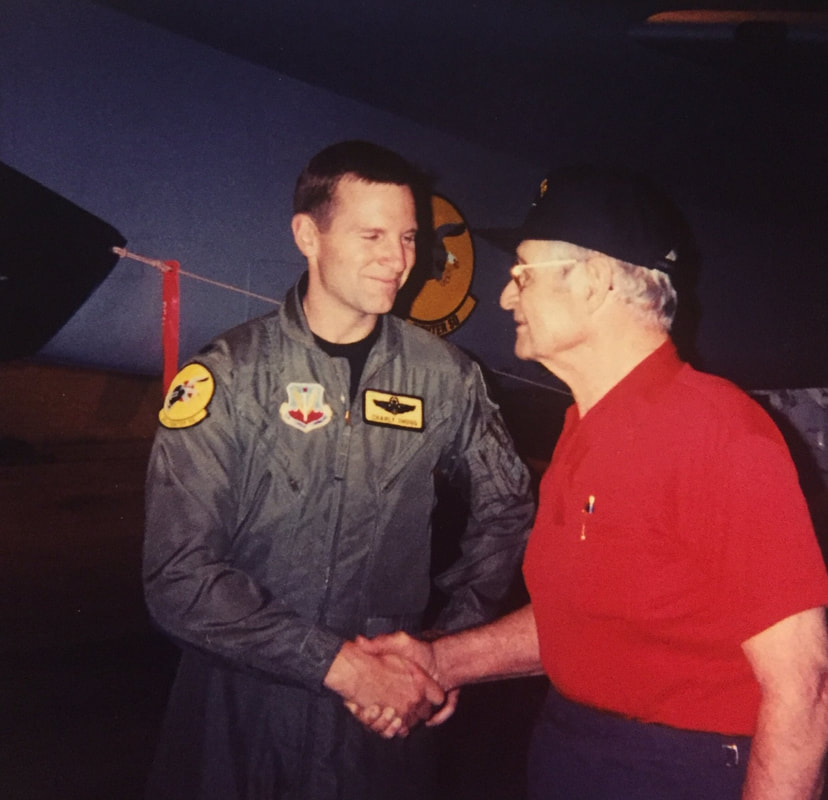